Quest for the Best: Craft Beer in Saskatoon

I’ll be honest here.   I haven’t always loved beer. In my early beer drinking days, I chewed blueberry pomegranate flavoured gum while I drank beer so it would “taste more like a cooler”; words that now make me shiver. I don’t really know how the transition to loving beer happened, but now I am obsessed! While travelling, I love to try my server’s favourite local craft brew… but somehow, they never seem to live up to the beers I love from Saskatoon. 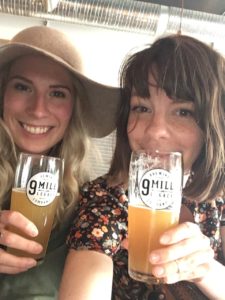 9 Mile Legacy Brewing has such a cute back story, and make a dang good beer.  The families of owners, Shawn Moen and Garrett Pederson, have been collaborating in business for generations.  A century ago, the families moved to Saskatchewan and owned farms just 9 miles apart. Get it?! That’s where their name came from!  Ugh! The cuteness!

Now their brew house is located on the   200 block of 20th Street in the eclectic Riversdale district, and do they ever serve great beer!  I have tried so many , and have loved them all, but the one that stands out the most to me is the Ella Pale Ale. It could be because of the name…. 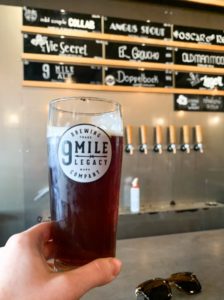 It’s not only their beer that makes 9 Mile Legacy Brewing the bomb, it is also their sense of community. They do a ton of local collaborations, such as  creating a beer with the signature spice blend of neighbour restaurant, Odd Couple, collaborating with chefs, and donating money and/or prizes to local events like the 9 Mile Monster Bike Race at Wintershines. 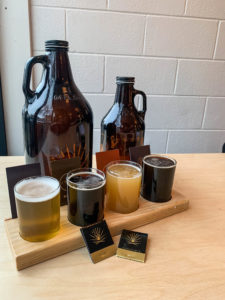 Shelter Brewing Company is the new kid on the block, but it already has created quite a name for itself. It is named for how owners, Stuart and Sarah,  want their taproom to feel; a warm and creative space, a shelter from the world, and a pointed reference to how they spend their down time… around a campfire, in a tent, or in their camper van. 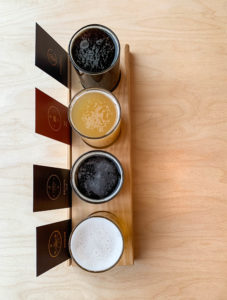 Located on 2nd Avenue in Downtown Saskatoon, Shelter has become a hotspot for after work hangs. It’s not just the taproom’s feel that draws people in, it’s definitely also the beer. Their New England IPA is one of my favourites, but whenever I visit I have to try their rotating taps. These beers are often flavoured with locally sourced berries or wild foraged ingredients like Buffalo Berries.

In addition to awesome local beer they also serve Dylan and Cam’s Tacos. Dudes?! Have you tried these? Tacos are $3 each and are bomb! They also make their own hot sauce.

High Key is owned by female entrepreneur, Madeline Conn (to learn more about her read our post about female entrepreneurs), who fell in love with the culture of craft beer while she was in Dallas training for a job. Their space is located on Quebec Ave and in the same building as local distillery, StumbleTown. 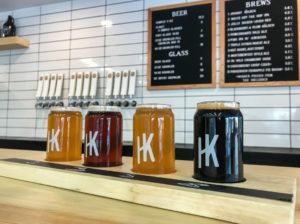 Their space is very modern and is welcoming to all sorts of people. It is a wonderful space to host events, or just casually meet on a weekend afternoon, post thrift adventure.  You do not have to love beer to love High Key. My favourite beer by High Key is the Pink IPA; its just so perfect for a hot summer day.

Prairie Sun Brewery opened in May 2013, also on Quebec Ave! Right across from High Key! The owners Cameron Ewen and Heather Williams are passionate about craft beer, and started one of the first businesses that kicked off the craft brewery culture that has taken Saskatoon by storm! 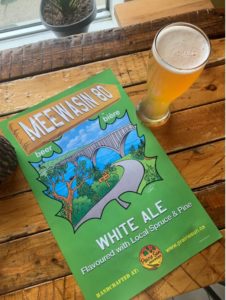 I have a lot of favourite things about Prairie Sun that I will spout off in no particular order! Their taphouse on Quebec Ave is dog friendly! Drink a beer with your dog! Prairie Sun is building a new brewery on Broadway where Lydias used to be! It will be great when  that historic location is no longer a parking lot! and last but not least Prairie Sun, has collaborated with The Meewasin Valley Authority ( heart eye emoji, they do so much for Saskatoon!) to create an amazing seasonal beer that captures the flavours of wild Saskatoon! Get Down there and drink the Meewasin 80 with your dog! 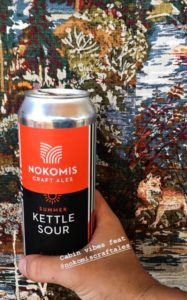 Although not technically located in Saskatoon, Nokomis Craft Ales must be an honorable mention. Nokomis is located in Nokomis, Saskatchewan, just an hour and a half from Saskatoon, and the Brown Ale, or the Sours… they’re just so good! You’ve got to try it when you’re in town!