5 Places to See the Northern Lights in Saskatoon

Saskatchewan is known as the land of living skies and Saskatoon has its fair share of spectacular sunrises and sunsets lighting up the city.

But at night, the sky still dances if you’re willing to stay up late enough to catch it. As an avid aurora hunter, I’ve watched many northern lights shows bright enough to see from the city. Sometimes you just need to be creative with where you go to watch them.

Here are five places to see the northern lights in Saskatoon. (I recommend grabbing a blanket and a hot chocolate while you take in nature’s best light show.) 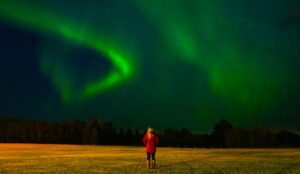 With more than 200 parks, Saskatoon has plenty of green spaces to watch the skies dance. Several are big enough to block off light pollution from nearby neighborhoods. A few locations to view the northern lights from include Lakewood Park, Silverwood off leash dog area near the river, and Sutherland Beach Off-Leash Recreation Area. You’ll probably forget you’re in the city!

2. Meewasin Valley Trails With nearly 40 square kilometres of trails and green spaces, the Meewasin Valley Trails offer several points to stop and watch the northern lights. Whether in the city at the Peggy Mckercher Conservation Area, along the riverbank trails or south of the city at Beaver Creek Conservation Area (on specific nights that they host stargazing events) and Cranberry Flats there are a variety of locations to set up and watch the aurora flicker and pulse across the sky. 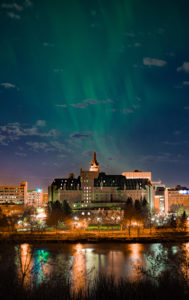 One of the most popular places to hang out in the city is also one of the best to see the northern lights. Head to the east side of the river for potential views of aurora flickering overtop of the Bessborough Hotel or climb to the top of the train bridge and look north for dramatic views of the lights dancing above the river.

If the aurora is bright enough, it’s possible to see them dance from several of Saskatoon’s best rooftop bars. I’ve personally caught a show on the rooftop patio at the Yard and Flagon on Broadway. It’s also worth grabbing a beer or two down the street at the Hose and Hydrant or at O’Shea’s Irish Pub downtown. 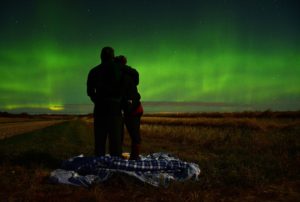 If you have access to a car and a sense of adventure, head north of the city limits to catch the northern lights. The lack of light pollution will increase their visibility. A favourite destination is along Penner Road near Wanuskewin Heritage park and towards Cathedral Bluffs or near the Warman ferry. You can also head east out 8th street or west from 33rd street for great northern views. It’s easy to pull off onto an approach or side road to enjoy the aurora.

A trick to knowing when the northern lights are most active is to follow updates and notifications from the NOAA aurora forecast.