Driving a Race Car at the Wyant Group Raceway

My neck aches as I strain to keep my helmet from tipping towards the netted window of the 1988 Monte Carlo stock race car. We are only on lap six but already I can feel the effects as a passenger as we speed around the 3/8 mile paved race track oval at 130 kilometres an hour. The hot sunshine beaming through the window is heating up the interior. By lap ten, I feel more sweaty and exhausted than I expected. But I am just getting started with my race experience at the Wyant Group Raceway. I have yet to jump into the driver’s seat to drive the stock car myself.

My driving instructor and professional race car driver Ryan Thompson is no stranger to high speeds and keeping his tires on the ground. Coming to the raceway with his parents since he was a kid, Ryan has now been racing at WGR for the past six years. His fastest time around the track is a 15.6 second lap, pushing nearly 170 kilometres an hour. For him, the most challenging part about racing is also the most exhilarating. “It’s a big mental game. Racing door to door with other drivers for 100 laps means you have to be physically fit and mentally capable to do it.” 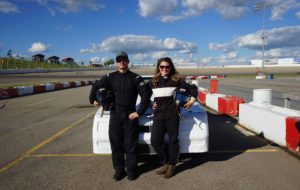 We pull back into the pit to switch seats. Ryan helps me slide through the open window without bumping my helmet on the frame. He clicks together the five-point harness holding me in place in the event of a crash. Attempting to reassure me about being behind the wheel at high speeds on a tight track, he jokes that it’s like riding a bicycle. 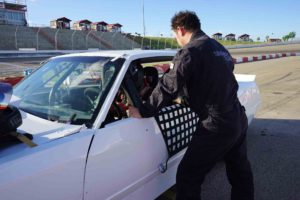 As we nose out from the pit, my adrenaline spikes as I put the pedal to the metal. The speed demon in me is whooping as we accelerate down the straightaway but I’m cautious as we come into the first curve and tap the brakes jerkily. Driving a stock car is highly nuanced. Every angle and decision made impacts how well you perform in a real race. 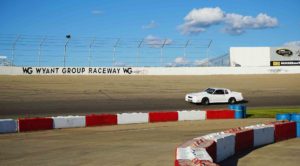 Slowly getting the feel for the car and how it handles around the curves I am able to accelerate faster and faster each lap around the track. Ryan nods and yells over the engine through his helmet that I’m doing really well. Although not officially timed, he estimates that I’m racing a 19 second lap or about 100 kilometres an hour. 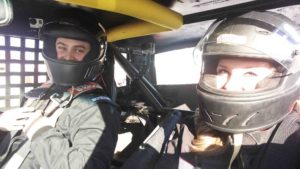 Ryan signals that it’s the last lap and I pull the car back into the pit. I'm vibrating with adrenaline and excitement. As soon as I kill the engine I explode with “that was amazing!”

It’s clear to me why Ryan loves racing. It’s exhilarating yet challenging and is the perfect combination for any adrenaline junkie with a need for speed.

Want to drive a race car?

The Wyant Group Raceway offers the WGR Race Experience several times throughout the summer. Participants can choose either a 10 lap ride-along for $40 or a ride-and-drive for $80. Book in advance by e-mailing Ryan at elements_racing@hotmail.com. Cash payment only.