I would bet at some point you’ve walked or driven around Saskatoon and noticed the artwork and statues throughout the city.

It’s hard not to – we have some really fantastic Instagram spots as well as many beautiful murals and artwork.

But have you ever taken the time to learn the history behind those public art displays?

I’ve always wondered about the statues – who the people are and why they were bestowed such an honour.

Some are obvious to me - like the bronze sculpture of Gordie Howe. But some I am less familiar with like Hugh Cairns in Kinsmen Park or what the story is behind the Ghandi statue downtown.

So I spent a morning wandering the city in search of all the statues of people, learning the backstory behind how they received such an honour.

Here’s a listing of just 10 of the sculptures I discovered: 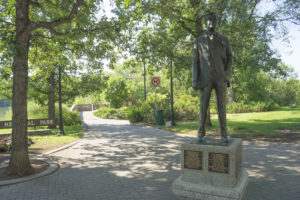 Born and raised in Saskatoon, the Right Honorable Ray Hnatyshyn served as the 24th Governor General of Canada from 1990 to 1995. Hnatyshyn is known for opening the grounds of Rideau Hall to Canadians and making the role of Governor General more genial and approachable than it had been in the past. In 1992, a statue of Hnayshyn was created by artist Bill Epp and installed in the city to honour the work and life of this Ukrainian Canadian. 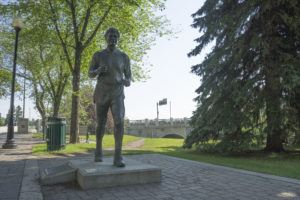 Sometimes mistaken for a statue of Terry Fox because he’s assuming a jogging position, the statue near University Bridge is actually of community volunteer, radio host and Order of Canada recipient Denny Carr. A passionate runner, Carr passed away from cancer in 1999 at the age of 60. The statue was created by artist Hans Holtkamp and installed in 2000. The sculpture is known to be decorated in costumes from time-to-time, including sweaters, muscle shirts and even an elaborate Optimus Prime Transformers costume. 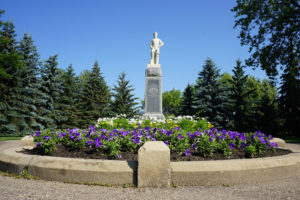 In 1918, 21-year-old Sergeant Hugh Cairns was killed in action in France during World War I. For his bravery, he was awarded the Victoria Cross, received the Distinguished Conduct Medal and was bestowed France’s highest honour, the Legion of Honour. The marble statue of Cairns, commissioned by the city’s Football Association, depicts him in soccer clothing as he was an avid player. He was part of the St. Thomas Church team who won the Saskatoon league championship in 1915. The statue, which was installed in 1921 and is the oldest piece in the city’s collection, overlooks the field where he often played before heading off to war.

The bronze statue of acclaimed writer Farley Mowatt (and his dog Chester) was erected in 2014 after his death at the age of 92. Mowat is well-known as the author of popular children’s nature books Owls in the Family and Never Cry Wolf. The statue was donated by Toronto businessman Ron Rhodes and took nearly four years to create. Rhodes commissioned the statue as a tribute to the impact of Mowat’s work as a gifted writer and environmentalist. 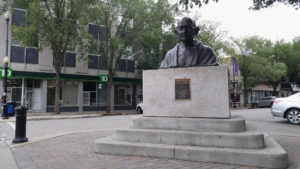 It’s a little surprising to come across a statue of international peace-maker Mahatma Ghandi in Saskatoon. But the bust was commissioned at the request of the Saskatoon India-Canada Cultural Association and was gifted by the Government of India to all the people of Saskatoon. The bronze sculpture represents Ghandi’s philosophy of non-violence transcending geographical borders and was sculpted by artist Ram Vanji Sutar and installed in 2000.

Interesting note: Regina also has a Ghandi bust at Victoria Avenue and McIntyre St-Smith St. in front of City Hall. 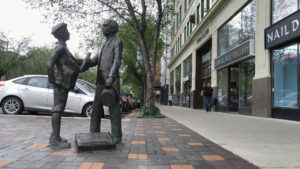 The statue depicts a young John Diefenbaker (the only person from Saskatchewan to ever become Prime Minister) selling then-Prime Minister Sir Wilfred Laurier a Saskatoon Star Phoenix newspaper on July 29th, 1910. Whether the meeting between the two is true or not is sometimes up for debate. But the Diefenbaker Centre has a replica of the statue and the Saskatoon Club has a copy of the newspaper in question. The monument began with a plaque commissioned by the city and 20 years later became a statue created by artist Bill Epp in 1991.

7. Egg Money Location: Sonnenschein Way and Avenue B, near the Farmer’s Market 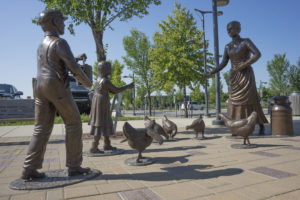 The statue is a tribute to Saskatchewan pioneer women. Commissioned by the Saskatoon German Days Committee and created by artists Don and Shirley Begg, it depicts a woman feeding chickens while two children play nearby. On the granite blocks surrounding the bronze sculpture are the names of 24 real Saskatchewan pioneer women from varying ethnic backgrounds who came to Canada in the late 1800s and early 1900s. Installed in 2009, the statue is complemented by a book telling the stories of each of the 24 women.

8. Fred Mitchell Location:Fred Mitchell Memorial Park, 410 Saskatchewan Crescent West The statue of Fred Mitchell is located in a tiny pocket park popular for wedding photos. The park was initially developed by Labatt who owned a brewery across the street near the river. When Labatt’s left the city, Mitchell’s Gourmet Foods took over the maintenance of the park and erected the statue of Mitchell in 2000 in memory of the long-standing businessman. Mitchell’s was eventually bought by Maple Leaf. In 2008, Maple Leaf turned the park over to the City of Saskatoon. The city’s visual arts placement jury and planning and operations committee voted to accept the statue as a piece of public art. 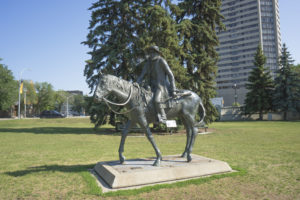 Metis leader Gabriel Dumont is an iconic hero and Canadian political figure. He was a fighter concerned for his people’s welfare. He was also a skilled horseman who was elected chief of the buffalo hunt by the age of 25. The statue designed by artist Bill Epp was installed in 1985 and depicts Dumont astride a horse. It is just one of many legacies of Dumont throughout the city and province. 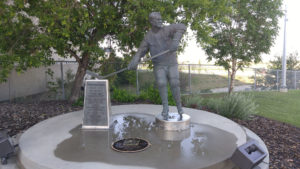 The local arena seems the like the perfect location for the bronze statue of professional ice hockey player Gordie Howe. But it took several years for Bronze Gordie to find his home at Sasktel Centre. The group who originally commissioned the statue of Mr. Hockey ran out of funds. Sculptor Michael Martin completed the statue using his own funds (even removing Howe’s head once to recast it in a more similar likeness after a comment made by Howe saying it looked too fat and too similar to his brother Vic). After years of standing in a field to a street corner on the edge of downtown Saskatoon, the statue of Howe finally ended up at SaskTel Centre in 2005 where it seems more than appropriate.