Pet-Friendly Places to Hang out In Saskatoon

It's not easy leaving your pet at home while you head out exploring Saskatoon and all it has to offer. But thankfully, dozens of locations in the city are pet-friendly so you won't need to leave them alone on their own!

While researching this article, I came across Facebook and Instagram posts by Prairie Pulse Photography & Video and need to give Stephanie Anderson a huge shoutout. Not only does she volunteer at Prairie Pooches Rescue in Saskatoon and is a foster, but she's also a pet photographer. 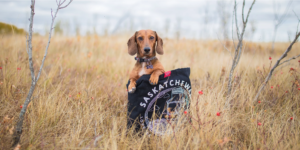 In 2018, she created a series called #petfriendlyyxe that profiled many of the pet-friendly locations in Saskatoon. She also does incredibly touching Requiem Sessions for terminally ill or elderly pets to celebrate and honour the unique bond between humans and their pets. Heartbreaking and heartwarming all at once.

With that, here is a list of dozens of Saskatoon's pet-friendly locations to take your partner-in-crime. 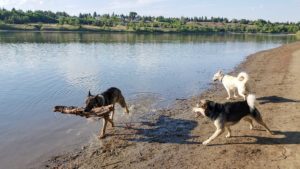 I just want to take a second here and gush about the City of Saskatoon's dog parks.

If you're looking for a spot where you can watch your pet at all times, they've got it - check out locations like Hyde Park off Boychuck or Pierre Raddison Park between 32nd and 33rd. If you're looking for a place where your pup can galivant through the forest and splash around in the river, they've got it at locations like Chief Whitecap and Sutherland Beach dog parks. There are 11 naturalized dog parks in total and they're all worth a visit. (There's even a Dog Park Ambassador Program if you're a local and want to get more involved in opportunities for improvement of these amazing spaces.) 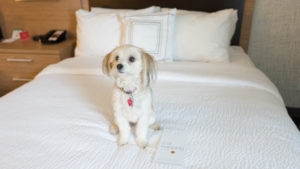 Many hotels in the city are pet-friendly. So many, in fact, that we've written an entire blog post about it! Check out Asia and Aviva's day out adventuring to all of Saskatoon's pet-friendly hotels.

Hot tips: the Hilton Garden Inn, Delta Hotels by Marriott Downtown and the Sheraton Cavalier have no fee. If you want ease-of-access to let Fido out to do his business, Country Inn and Suites by Radisson near the airport have doors direct to outside. 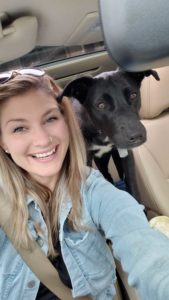 En route to go shopping in Saskatoon with Alpine.[/caption]

There are a number of businesses in the city to take your pet while you're shopping. A great resource to double-check is Bring Fido or call ahead.

I've confirmed with each of these locations that you can shop with your pup.

Stop in at these local stores: Dutch Growers, Floral Acres, Broadway Shoe Repair, (they even have an Instagram highlight of pet visits), The Better Good, Early's Farm and Garden Centre, Fandango, Doug's Spoke n' Sport (they have a Red Fox Lab pup on-site), Bike Universe, Blossoms Living and Anthology, Hardpressed, Escape Sports (make sure to say hi Gauge the Brittany if he's out front) and Glitch Gifts and Novelties. 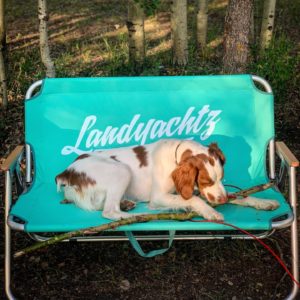 P.S Many of these places offer treats for your pet when you come in. This also isn't a complete list of local shops that are pet-friendly but a great starting point. Feel free to add locations in the comment section! 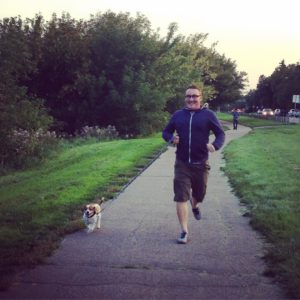 Have you heard of the YXE Underground? It's a podcast interviewing Saskatoonians doing amazing things. It's created and hosted by local resident Eric Anderson who's also a dog owner. Eric and his insta-friendly pup Fred are big fans of the Meewasin Valley Trails and Cranberry Flats for locations to hang out together. 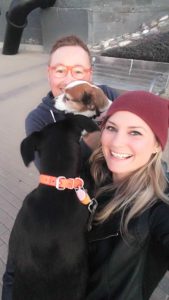 Fred and Alpine like to go on long walks by the river.[/caption]

Here's what Eric said about the MVA:

"We are so fortunate to have the Meewasin Valley Trails here in Saskatoon. My wife and I love taking Fred on the trails to explore, especially Cranberry Flats. Whether it's early on a summer morning or as the sun is setting on a chilly January afternoon, Fred loves the open spaces that Cranberry provides. He especially gets excited when we hit the boardwalk trail because he knows we're getting close to the river! Hitting the trails with Fred has been a wonderful way of exploring the natural beauty of our city and as soon as Fred gets home, he beings thinking about his next adventure!" 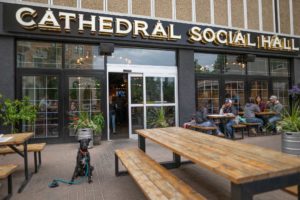 Alpine chilling on a summer evening at the Cathedral Social Hall.[/caption]

In the summer months, Saskatoon comes alive. The city's patios are a favourite location to grab a cool drink and a good meal. Many of them are also pet-friendly.

I took Alpine to Cathedral Social Hall on Spadina and she loved the ambience of downtown as well as the extra attention she received from the staff.

Other pet-friendly patios in the city include JT's Bar and Grill, City Perks Coffeehouse, Leopold's Tavern, Homestead Ice Cream (the outside bench-area), and Bus Stop Refreshments.

Many of these locations have doggie bowls filled with water so your pooch can stay hydrated too. There are a number of other businesses with pet-friendly patios, be sure to call ahead to confirm.

The SLGA regulates the serving of alcohol by requiring taprooms, breweries and distilleries to have two light meals available to their guests. This means they need to be registered as a licensed eating establishment and can't be fully pet-friendly. However,  two places have taken the extra step to still include your pet in your visit.

9 Mile Legacy Brewing Company Dogs can pop into the entrance if you're picking up a growler but because 9 Mile is a public eating facility, you can't dine and drink with them.

Prairie Sun Brewery Prairie Sun Brewery has always been pet-friendly and that status hasn't changed since they've moved to their new location on Broadway. They will have a separate space near the entrance with pet toys and beds so you're pooch can join you for a brew.

*At the time of writing, their location will be open in September 2019, to be announced.

7. Saskatoon Pets in the Park 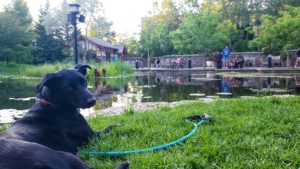 Alpine on leash at Boffins Gardens.[/caption]

If you're looking for a place to hang with other pet owners, Pets in the Park is the perfect event. Every year this popular summertime fundraiser combines raising money for medical care for sick, injured, orphaned and homeless animals with dedicated animal-lovers. There's often a pancake breakfast, local musicians, beer gardens, pet portraits, nail trims, demos of fun activities for your pet like flyball and rally obedience and a Critter Cribs auction. The event usually takes place mid-June. 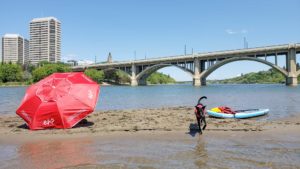 Instead of hanging out on the river, take your pup to swim in a public pool at the end of summer.[/caption]

Once a year, at the end of summer, Mayfair Pool opens its doors to pups of all sizes for a free swim in the pool for its Dog Days of Summer Event. You need to register online in advance to book your pup in for an hour session in the pool as it's limited to 60 dogs at a time. This year the event takes place on August 28th from 11 am to 7 pm. The Saskatoon SPCA will also be on-site hosting a fundraising barbecue with proceeds going towards their initiatives.

Where else do you take your pet when out exploring Saskatoon? Let us know in the comments!