Saskatoon: The Weird and Wonderful

I have always been obsessed with weird, creepy or “haunted” things. On a road trip through the Rocky Mountains at age 12, I convinced my parents to go off route to visit a haunted doll that was ‘known’  to come alive at night and mess up the museum. Even though the doll was behind glass and didn’t make a move while I was there, it was the highlight of my trip.  That was maybe the first time, but I love to seek out the weird and the wonderful in places I visit ever since. Ghost tours in Edinburgh? Yes please! Catacombs of Paris? Count me in! The abandoned house in the back corner of your family farm that no one goes into anymore? Just try and keep me away.

So naturally, when it was time to research this month’s blog post, I was more than happy to discover some of Saskatoon’s weird and wonderful attractions. 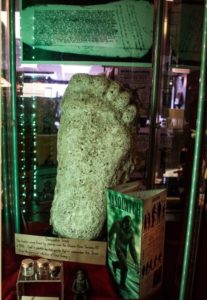 Glitchy’s Believe It Or Don’t is located in the back room of Glitch Gifts and Novelties on 33rd Street, and is full of amazing, weird, and wonderful finds. The museum opened in October, 2018 and is free to the public. Highlights include: a cast of a Bigfoot Footprint discovered in 1976, shrunken heads, creepy clowns, as well as monthly Zoltar readings in the summer. When I asked what the creepiest thing  their museum was, they told me it was Sophie the Haunted Doll. Sophie belonged to an 8 year old girl, in the 1800’s, who disappeared into the South Saskatchewan River. I won’t get into details about Sophie.  You will want to go down to the Museum and experience her for yourself. 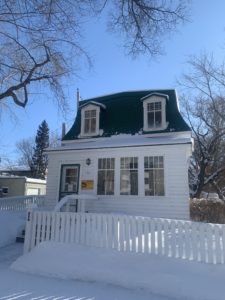 If you are still reading this blog post in hopes of a ghost story, then you’re in luck. Built in 1884, The Marr Residence is the oldest house still standing in Saskatoon. In 1885, the house served as a field hospital during the Riel Rebellion.  Today, the house still honours its history with an exhibit dedicated to telling the story of the relationships between settlers and First Nations during the Northwest Resistance of 1885. But enough about history, let’s get to the ghosts.

The Marr Residence is said to have at least two ghosts within its walls. The first is a child. The child's face, and occasionally it’s disembodied voice are encountered in the house. It is most commonly witnessed looking out through the front window of the house. I can only assume the child ghost loves people watching as much as I do.

The second is a man who resides in the basement of the Marr Residence. It is said to react very aggressively, often yelling at women who walk through its space.  Someone might want to tell this guy that in 2019, women do not stand for being treated like that!

The Marr residence provides tours and great activities during the summer! Check them out and maybe see yourself a ghost!

When I was in high school, my friend and I would take our Ouija board down to the Nutana Pioneer Cemetery and see if we could communicate with any of the long-forgotten spirits that call this cemetery home.  In 1884, the section of land was known as the Temperance Colony of Nutana’s “unofficial” cemetery. In 1888, a committee was formed to maintain the cemetery, and in 1889 the “Nutana Cemetery” was officially recognized by the Provincial Government. The last burial in this cemetery took place in 1948. Over the decades, the hillside collapsed three times due to water erosion and many of the gravesites were damaged or moved.

My friend and I were never able to communicate with any of the spirits despite  many reports of disembodied whispers in the cemetery.  Jason Ruetz, of Pitchblack Paranormal, a paranormal investigation group in Saskatoon, recorded one such whisper! 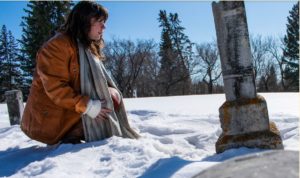 Learn more about the cemetery here.

The University of Saskatchewan’s Statue Garden 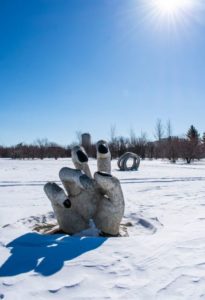 Let’s end this article on something not creepy at all! Just weird and wonderful! The Statue Garden at the University of Saskatchewan features a number of cool pieces that vary in form and material.   I think the hand is my very favourite piece.  It is located along the Meewasin Trails and is a space for anyone to come enjoy and interact with art in their own way.