I pulled the bison hide tight around me and snuggled into the coarse fur. It was nearly zero degrees outside. Yet sheltered inside the 10-person tipi and underneath the heavy weight of the fur, I was toasty warm. 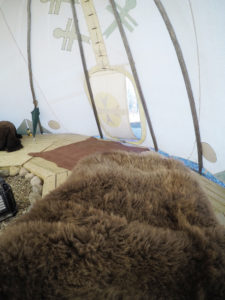 It’s not every day that you get to sleep in a tipi underneath a real bison hide. It’s even more unusual to share that tipi with a travel writer from the New York Times.

Jada Yuan, the 52 Places Traveller, had landed in Saskatoon a few days prior. The city was one of her 52 stops around the world as part of the New York Times list of 52 Places to Go in 2018. At number 18, Saskatoon is the only Canadian location on that list.

I met Jada late that afternoon at Wanuskewin Heritage Park. She and I were testing out a new program the cultural park hopes to offer in the future: a luxury tipi experience.

Although Wanuskewin has offered educational tipi sleepovers for years, they are designed for school groups or groups of more than 15 people. The luxury experience is meant for travellers and smaller groups as a more intimate yet still educational program. 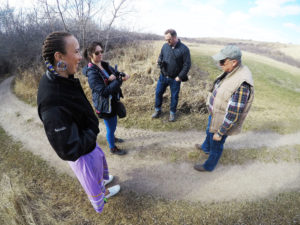 To start our overnight stay, we joined Dr. Ernie Walker on a tour of the archaeological dig site. Since the 1970’s, Dr. Walker has been an integral part in helping uncover artifacts that tell the stories of the Indigenous peoples of the Northern Plains. 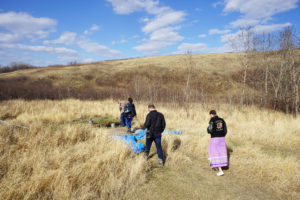 Today, the archaeological site is the longest running in Canada. The artifacts found here are twice as old as the Pyramids of Giza with several artifacts dating back to more than 6000 years ago. 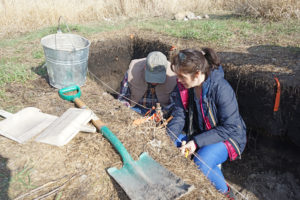 Having experienced the dig site previously as the Saskatchewanderer I was excited to watch Jada get a hands-on opportunity looking for artifacts. Climbing right into the dig-site pit, it was mere minutes before she pointed at an object in the soil – a 1200-year-old-bone fragment. Finds like this are not unusual, particularly when Dr. Walker is on-site. 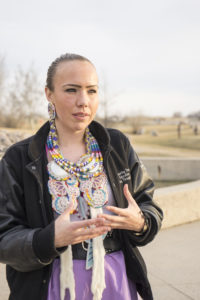 The Power of Storytelling Blending Indigenous history and stories of the past with the present, there is something incredibly special about Wanuskewin. It’s a feeling that’s hard to put into words but can be perceived immediately upon arriving. I feel it every time I visit - it makes my skin tingle and prickle in a powerful way.

Part of the immersive experience in the park is listening to and sharing in the stories of those who work there. Throughout the evening we were joined by Randi Lynn Nanemahoo-Candline, a Cree woman, park interpreter and powwow dancer. She shared with us stories about the park and Indigenous history but also shared stories about her own life and experiences. 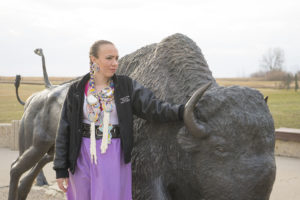 An accomplished powwow dancer, she brought along pieces of her and her family’s regalia to share with us. I was in awe at the finely detailed work of her beading and the importance behind the designs and details. 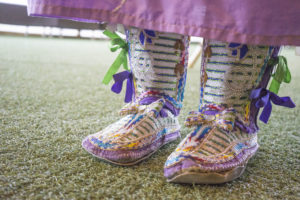 Indigenous groups often use florals in their beadwork but they also pay homage to other cultures to help tell their stories, such as the lotus flower which represents resiliency in Buddhist teachings. For Randi, it’s about treating every day as a journey, having faith and finding balance between performing and spending time with her family. 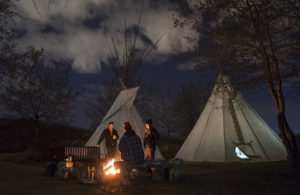 Bonfire Travel Tales Beneath the Stars

Throughout supper and into the evening, Randi toured us around the facility and the park grounds. We started a bonfire shortly after sunset. Our conversations blended local to international and we sat around swapping stories about our travels while baking bannock on a stick over the heat of the fire. 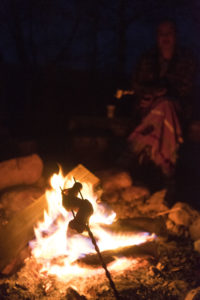 I was curious to hear how Jada’s year had been going so far and how she managed such an intensive travel schedule across so many time zones. I was also curious to the tech gear she carried. During my year as the Saskatchewanderer, I had the luxury of a vehicle to store my tripods and half a dozen pairs of shoes. But for Jada, the need to pack light trumps carrying too many items.

Portable and multi-purpose is her trick. A good down jacket works in a variety of situations. A point-and-shoot camera, gimbal for her cell phone, voice recorder and selfie stick round out her tech kit. 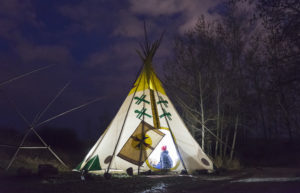 As the stars slowly started to make an appearance, I hoped the northern lights would show up to play as well. Although it’s never guaranteed, the chance of watching aurora dance over a lit up tipi could have been the perfect end to Jada’s stay in Saskatoon.

We’re so fortunate here in Saskatoon. Even from the city, we’re able to see more stars than most people ever get the chance to experience. It’s something I’ve really come to appreciate after travelling so many places around the world. Countless times I’ve heard people speak in awe of the night sky when they finally get to see it clearly - out from under the pollution of a city.

The northern lights never did come out but instead, we set up a tripod and spent time snapping photos of the fire, the tipis and the stars. 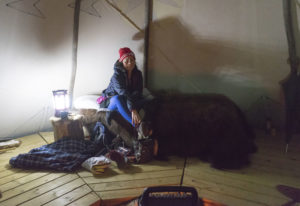 Near midnight, we packed away our gear and settled into the tipi. Two portable heaters awaited us during the chilly May evening but the real warmth came from the heavy buffalo hides overtop our sleeping bags and good conversation. Although the hour was already late, Jada and I laid there in the dark, connecting over shared travel stories and the familiarity of similar jobs. 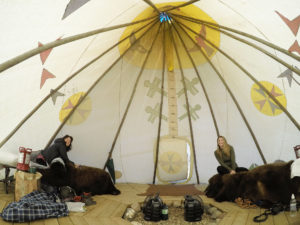 The Life of Plants

At breakfast the next morning, we were joined by Ashley Rabbitskin, another park interpreter. She started working at Wanuskewin while going through nursing school but has stayed on because of the deep connection she feels with the place and the plants. 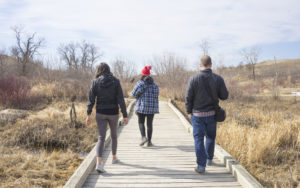 She took us out along the walking trails, sharing with us her knowledge of plants and their myriad uses. Common plants I see every day while out hiking and running became new to me when she informed me of how they can be used.

By mid-morning and after a tour of the galleries, our overnight tipi experience at Wanuskewin was complete. Jada had to head off to the airport and jet out to her next destination. I was heading out for a weekend away in Saskatchewan for another story I was working on. The life of a travel writer is often seen as glamorous - a dream job. And we both are truly fortunate for the places we get to visit and the activities we get to be part of. But perhaps the best part of it all is not the experiences you have while travelling, but the people you meet along the way and get to share those experiences with.